Researchers at Princeton University needed a large diameter ultra-precision rotational axis with a motor drive. Sounds routine. But there were some catches that made this project more than a bit unusual.

There are many big players who provide rotary tables but at ABTech, we take pride on coming up bigger than our competitors when it comes to solving our customer’s unique requirements. So naturally, Princeton came to us.

We started with an AT400 series rotary air bearing table capable of holding 2,000 lbs with certified rotational accuracies of better than 5 millionths of an inch. To that standard platform we added an integrated direct drive and a single axis programmable controller to continually move this mass in a repetitive oscillation pattern for several weeks at a time.

The research project was installed at the Amundsen-Scott South Pole Station early in 2013. This marked the first time an ABTech product had been “exported” to Antarctica and it made the 7th and final continent where our products are being used!

As Marc Smiciklas, the post doctoral research associate at Princeton reported: “I just got back from the South Pole last week. Everything there went well. The experiment is now up and running and the air table is working flawlessly!”

For the truly technical, here is an excerpt of the article published online by The Antarctic Sun: 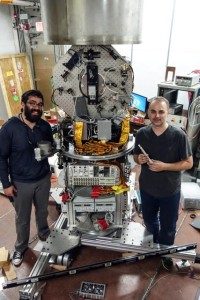 New Experiments Installed at the South Pole in January

The installation of the South Pole Lorentz Invariance Test (SPLIT) is being overseen by Princeton University post-doc Marc Smiciklas for principal investigator Michael Romalis.
A violation in this symmetry would suggest that there’s a new element to physics which falls outside of what the current standard model can predict.

The SPLIT apparatus arrived in January. One of the main tasks involved alignment of the sensitive laser optics. Smiciklas will work with research associate Andrew Vernaza on developing comprehensive maintenance, testing and operating procedures for the winter.

GET A QUOTE TODAY

Thank you for your interest in ABTech’s ultra-precision measurement tools and services.
Please tell us a little about what you need to accomplish and we will be in touch to discuss any of the additional details that will help you choose your best option.