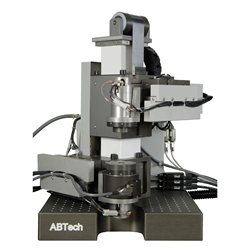 In 2005, the engineers at the University of California’s Lawrence Livermore Labs needed a high precision air bearing system, a target assembly station with a position accuracy of 4 millionths of an inch – that’s 0.0000004 inches (or 0.01 microns!). The alignment of the two half shells of the target was very critical for the success of the experiments.

ABTech delivered. And today, we are proud to have played an early role in the fusion research program which recently led to perhaps the biggest-ever breakthrough in this field.

So what did ABTech’s early work for Lawrence Livermore entail? Our 5-Axis Air Bearing Target Assembly Station had the ability to incrementally jog the upper and lower target halves to a position of 4 millionths of an inch, that’s 0.000,004″. The operators used a CCD camera and large monitor to be able to zoom in on the target while jogging the motion system by 4 millionths of an inch moves until it was perfectly aligned.  Then, using a single camel hair, they coated the seam with epoxy.

The motion system included force sensors so they could then push the two halves together to a known force and hold it there while the epoxy cured. It was a very delicate operation and the high precision air bearing motion system enabled them to successfully assemble the targets. These became the targets that the world’s largest laser (housed in a building the size of three football fields) will heat to simulate thermonuclear ignition. By producing temperatures and densities like those found on the sun, these experiments help scientists sustain confidence in the stability of the nuclear weapon stockpile without performing dangerous testing.

ABTech is proud to have been asked to contribute to this impressive research. This early research played a key role in advancing the development of the target systems that would eventually be employed in Lawrence Livermore’s breakthrough fusion power generation research.

GET A QUOTE TODAY

Thank you for your interest in ABTech’s ultra-precision measurement tools and services.
Please tell us a little about what you need to accomplish and we will be in touch to discuss any of the additional details that will help you choose your best option.