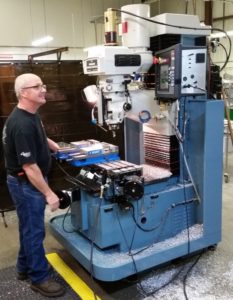 Dan working on the Proto-Trak

Calling himself a “country boy,” Dan Underwood, machinist here at ABTech, enjoyed growing up in the rural area of his family’s homestead in Chesterfield NH, where he still lives today.  He learned early on, from his Dad, about providing for himself.  He also had neighbors taking him on hunting and fishing trips and was self-taught on the machines in the family garage.  From a young age, Dan had an interest in mechanics and fixing things. When equipment broke down, he would head into the garage and see what could be done to get things back up and running again.

In his late teens, he lived in Alaska a whole summer. While he was there, he took a job working on a gas platform running gas lines on the ocean floor.  He enjoyed the work and being able to see the northern lights was an amazing experience but decided when the project was complete he would head home.

Back home Dan began working in a machine shop in the Keene area. He started in an entry-level position with an opportunity to grow and learn he worked his way up to running a CNC machine. His supervisor at the time mentioned a new company looking for machinists so after 8 years Dan decided it was time to change from a big company to a smaller one.

That was 15 years ago when Dan started here at ABTech as one of the company’s first employees. He enjoys the smaller atmosphere here where employees are given the freedom to walk into the president’s office with ideas they may have on a part of a project. Dan has been a key part of the company’s growth, machining ultra-precision parts and mentoring new machinists in the ABTech way. He has enjoyed seeing the successes the company has had, and it shows in the pride he and his fellow employees take in working here.